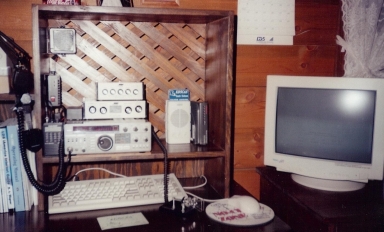 My interest in amateur radio, more commonly known as ham radio, began at the age of 13.

Our scoutmaster had arranged for a local ham to attend one of our campouts and do a ham radio demonstration.

I remember the man using a fishing rod to throw lines into trees to pull up a dipole antenna. The first demo was to use a repeater to autopatch and call the scoutmaster’s wife. We boys got a big kick out of that, because Ms. Gloria always answered the phone in a dramatic Southern-style “Hel-lo”. Next, he demonstrated SSB and CW, working many stations around the world from beside our campfire that night.

However, I suppose that I didn’t express enough interest at the time to be taken seriously (as if a 13 year-old knows what he wants). So 13 years passed before I met another ham. At age 26, I was helping my boss, Jim, split firewood with my hydraulic splitter. We finished the task ahead of schedule. Jim, W5LA, invited me inside. He asked if I knew anything about ham radio. I relayed my Boy Scout experience. After just a few minutes, he’d made QSOs with several European and Asian stations. I once again was hooked.

Jim elmered me along the path to get my license. Only 19 days passed from that re-introduction at his home to the testing session and subsequent license grant. On August 19, 1997, Amateur Radio Station KD5CAS was born as a Technician Plus. This is memorable to my wife and I, as our first child had been born six weeks earlier, and we both were still getting used to the added role of parent.

Not being satisfied with limited operating privileges, I pursued upgrades in prompt fashion. General – April 1998, Advanced – March 1999, and Extra – July 1999.