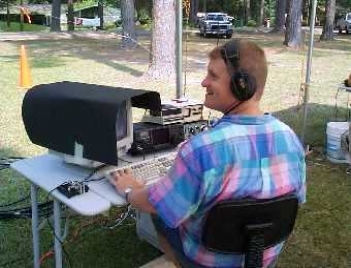 It was Field Day 1998.  I had been a ham only 9 months, and had really never heard of contesting.  Our club was to operate from the football stadium at West Monroe High School.  I was appointed to be a member of the Field Day committee and assigned to rent a pop-up camper with air conditioning for the CW station to be housed in.  We also had the sherriff’s department Em-Comm bus, and a local TV station’s remote switching trailer.

I had brought my home station to be used on 40 and 15m SSB.  Very modest, it was a stock (no filters) Kenwood TS-430, an MFJ969 antenna tuner, and a 135-ft dipole fed with ladder line.  It was set up in the TV station trailer.  At that time, our club always had one person to operate the radio, and another to log using NA by K8CC on the computer.  No one used rig control, and the computers were not networked, nor did anyone use SCP.

I was sitting behind 2 guys as they operated early on Saturday afternoon.  Ken N5WKI was logging and Ray W5EW was running the radio on 15m SSB.  Ken needed to take a nature break, so Ray didn’t ask, he told me to sit down and log for him.  A total rookie, I sat down and began logging for Ray.  However, I could touch-type over 60 wpm, so there was an advantage for me.  Ray is a pretty good contester, and he was running at over 60 QSOs per hour.  Eventually, Ray needed a break, and told me to slide over and operate the radio and log until he got back.

Some 30 minutes later, he returned to find me still holding the frequency and running at 90 QSOs per hour.  At that point, he said I didn’t need any help and left me to my own devices.

Three weeks later, I enter the IARU and won the LA section.  The doctor has confirmed there is no cure.