This past weekend (Thursday, March 3 to Monday, March 7) was a road trip of 2,200 miles. I drove up to K8AZ for my 9th time as a guest operator for a major DX SSB contest.

As always, I thoroughly enjoy being with Tom and the ‘AZ Crew. Tom has built a fantastic station, and every time I go, there has been an improvement since my previous visit.

All of the scores are posted on 3830scores.com, just use the search in the top right of the 3830 page.

Back in January 2018, I met George K7BFI on the air one evening. Turns out we had a few things in common. So while on vacation, I took the opportunity to stop in and meet him at his home in Utah face-to-face. Thanks George and XYL Karen for a wonderful breakfast, and even better conversation! 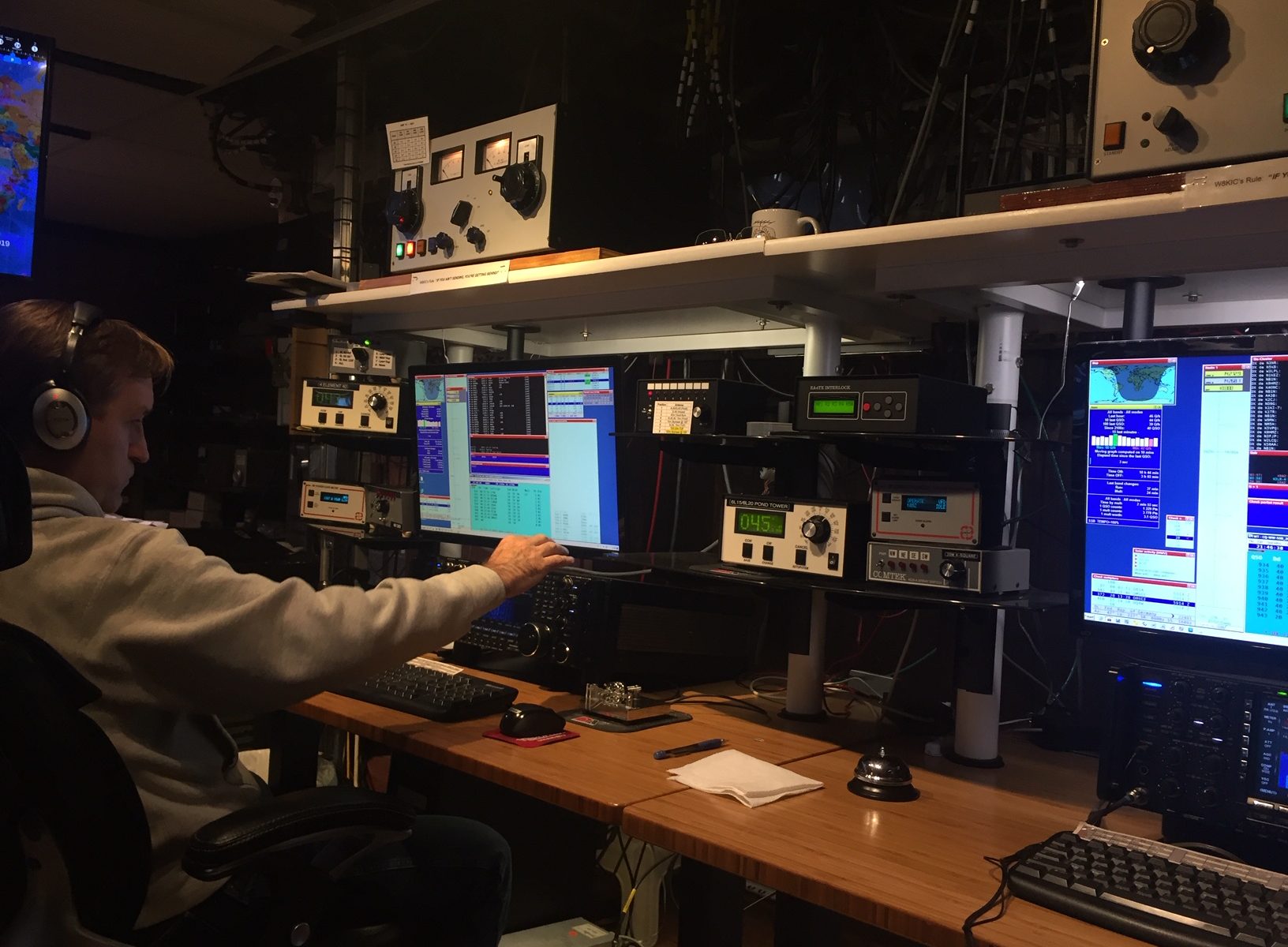 I made my 7th trip to Chesterland, Ohio to the fantastic station of Tom, K8AZ for the 2019-CQ WW SSB contest. Yes, it is a long drive – 16 hours or so. But the camaraderie with the gang makes it all the better!

As usual, I spend some time on Friday helping Tom with various maintenance, repairs, or installations of new items. This trip was no exception. Many hands do indeed make light work!

Tom takes a pre-contest walk around the antenna farm. This time, we found the rope supporting the SW element of the 80-meter transmit 4-square had broken, and the result was a rope tangled up in the elements of several yagis on a rotating tower.

The next morning, it was raining. The forecast called for increasing winds throughout the day and into the night. K8AZ and I ventured with bow and arrow to get a string over the appropriate tree. First challenge was using a sling blade to clear walking paths and work areas in the raspberry thicket, then cross a creek to find the loose end of the rope. Second challenge was to place the string. First shot success! Then pulled a larger string, and at last the final rope. With the antenna repaired, back to the house for shower and then operating time again.

Near sunset on Sunday night, suddenly 80-meter 4-square SWR went really high. Upon inspection, we found the NE element had broken loose from the feed point. Hauled a ladder out and worked beyond sunset to complete the repair with 20 minutes left in the contest. 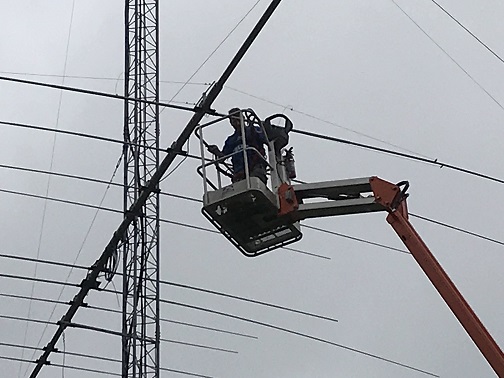 Over time, things up in the air change! I’d put together an ambitious to-do list!

Bobby WM5H and I rented a 55-foot aerial lift, because the 40-meter feed point is 12 feet away from the tower. With Bobby as ground crew and Scott in the bucket, we were able to complete:

At the end of the second day, some items remain to be completed: 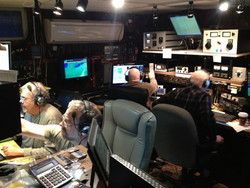 Once again W5WZ will be a guest operator at K8AZ near Cleveland, Ohio.  This will be my fourth time to join the group for a contest at Tom’s excellent station.

Stay tuned for a summary of the weekend!

The 2011 CQ WW SSB is now history! I left from Shreveport LA on Friday morning. Once I got to Cleveland Ohio (aircraft mechanical problems, late flight crew, missed connection in Dallas, rerouted to Chicago, near-miss connection, and lost luggage), I had a great time with a great group of ops (K8AZ, K8BL, K8MR, K8NZ, ND8L, W5WZ, W8CAR, W8WTS, WT8C) at a fantastic station. Tom K8AZ and his golden retriever Shane are first-rate hosts!

Here is the scoop on the K8AZ station:

All antennas are available at all four positions; however the TUP rotating tower requires coordinating which band controls the azimuth. The switching scheme is fantastic. Everything is very well engineered. Inter-station interference was minimal – the station employs Dunestar 200watt band pass filters between transceivers and amps, as well as some W3HQN high-power filters after the amps (serial numbers on all were less than 15). There is liberal use of copper grounding strap neatly in the entire basement shack. All cables are neatly and consistently labels. All controls are neatly and clearly labeled.

Inside, the transceivers are three FT-1000MP Mk-Vs and one K3- all fully-loaded with appropriate Inrad filters. All homebrew amps: three 8877 and one 3cx1200. The amps’ power supplies are beefy, with two of them using pole-pig transformers.

There are six identical computers running Win-Test for logging; 2 of them are spares, but are up on the network during the contest with the log being written to all 6. That way, an in-contest failure only requires relocating the computer. Win-test is different from N1MM but still easy enough to get the basic functions down. Tom insists on footswitch PTT (my favorite anyway) and uses Heil Quiet Sets (no longer in production) with HC-4 mike elements.

The M/S strategy was keep the run station running. Anytime the rate got down below 120 or so, we were looking to change the run band for at least the 10 minute clock. The other 3 transceivers were constantly tuning, listening, and scanning the DX cluster spots for new mults. Early in the contest, we would ‘stack’ the band maps with mults to enable keeping the mult station rate up for the 10 minutes, by simply point & shoot. As the hours went by and the mults were harder to find, often the 10-minute clock was open (meaning we could change mult band at any time) and we would change for a single mult. Sometimes the rate would slow, so we’d have one of the other receivers stack a band map, switch to that band to ‘point & shoot’ for 10 minutes, then switch right back to the previous run band.

Sharing time with the other 8 ops, I got 6 hours sleep on Friday night and 5 1/2 on Saturday night.

Observations- when the propagation is there, the Europeans are loud! But I think our openings in the south last longer. Over the pole flutter is there on more paths since the location is further north and the polar region is appears wider.

There were several light-hearted comments about how slow I talk and about my ‘hard-to-understand’ accent. I thought they all talked in FFWD mode 😉

And the best part — I was home on Monday evening to trick or treat with the family! What a weekend!

I made a PowerPoint presentation for our local club meeting held on the night after I returned home.