Back in Feb 2015, I noticed that my top rotator would not work from the control box in the shack.  Troubleshooting and testing led me to the conclusion that the pulse counter reed switch in the positioner had failed.  I placed a phone call to M2 and discussed of my findings; they agreed that the reed switch was the likely culprit.  I ordered the parts, and had them in hand in just a few days.

Meanwhile, I had discovered that I could turn the antenna with a 12vDC power supply, and eyeball the position of the antenna.  Point it at Europe, or at Asia, and just leave it became my S.O.P. ! That may have been my crutch!

As the antenna and mast combination weighs 380 pounds, I stalled on this project (because of my crutch!) for over 2 years. 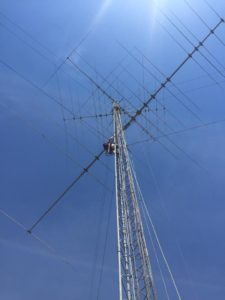 On Friday 6/9/17, I went up the tower planning to remove the rotator, bring it to the shop, and complete the repair after sunset so it would be ready to reinstall on Saturday morning.  When I built my tower, I considered the future possibility of having to repair a rotator.  Therefore I installed a plate and thrust bearing midway between the top of the tower and the rotator, and did not engage the set screws to the mast.  So the order of work was to engage the set screws, place two U-bolts directly on the intermediate thrust bearing to support the mast vertically, then lower the rotator shelf from beneath the motor, and finally unbolt the mast clamp from the drive plate, thus leaving the mast clamp firmly attached to the mast.

All was going well, until removing the 2nd of 4 bolts from the mast clamp to drive plate.  I was using box end speed wrenches, and mindlessly backed the bolt out too far to remove the wrench.  I didn’t have another wrench with me at the top of the tower, and it was sunset.  So down I went. 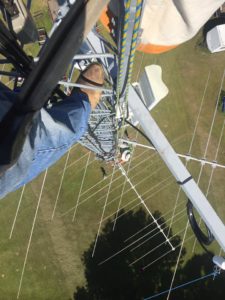 With another wrench, forward progress began rapidly and then halted quickly when the rotator shelf plate needed to be completely removed from the tower to allow enough clearance to get the Orion out of the tower at a section junction (no Z bars there).  My shelf was just a bit too tight!

Finally on the ground by 1030am, and the workbench repair went along precisely by the instructions.   Then reverse the process to reinstall.

I admit, it has been so long that I had to read the manual to know how to operate the control box!