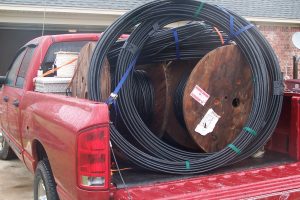 3/25/09 — Acquired another 2,000 feet of 1/2″ hardline.  Now I can put unbroken runs from the shack to the tower.  I have decided to mount the StackMatches at ground level at the base of the tower.  Also acquired 1,000 feet of 4-18AWG with tape and braid shield to use as control wiring.

3/14/09 — Gave a presentation on Antenna Stacking during the Louisiana Contest Club meeting & forum at the Rayne LA hamfest.  Met John WE3C at LCC meeting.  After discussion, now I’m not sure about mounting stacking relays up the tower.  Decidedly undecided, again.

3/13/09 — Have begun checking inventory of antenna & parts to ensure all will be on hand to assemble and mount on the tower.

1/31/09 — Built 3’x3′ concrete pad with hole thru center to mount telephone pedastal cabinet on.  Installed a piece of 20″ culvert in the ground as a cylindrical pull box at the tower end of the conduit.  I will place the concrete pad/pedastal over the pull box, and from there use 4″ conduit to route lines to the tower.

1/23/09 — Installed a 4″ and 1.5″ underground conduit from the shack entry point to the base of tower #1 (roughly 190 feet).  Also installed a 12/2 UF cable to provide 120vAC at the tower.  Lastly, installed #4 solid bare copper from the base of the tower to the western guy post and then to the shack entry point. There are 10′ ground rods installed at 0, 20, 40, 60, and 80 feet away from the tower.  Now the tower, shack ground, and electrical ground of my shop’s main panel and my shack’s sub-panel are all bonded together. 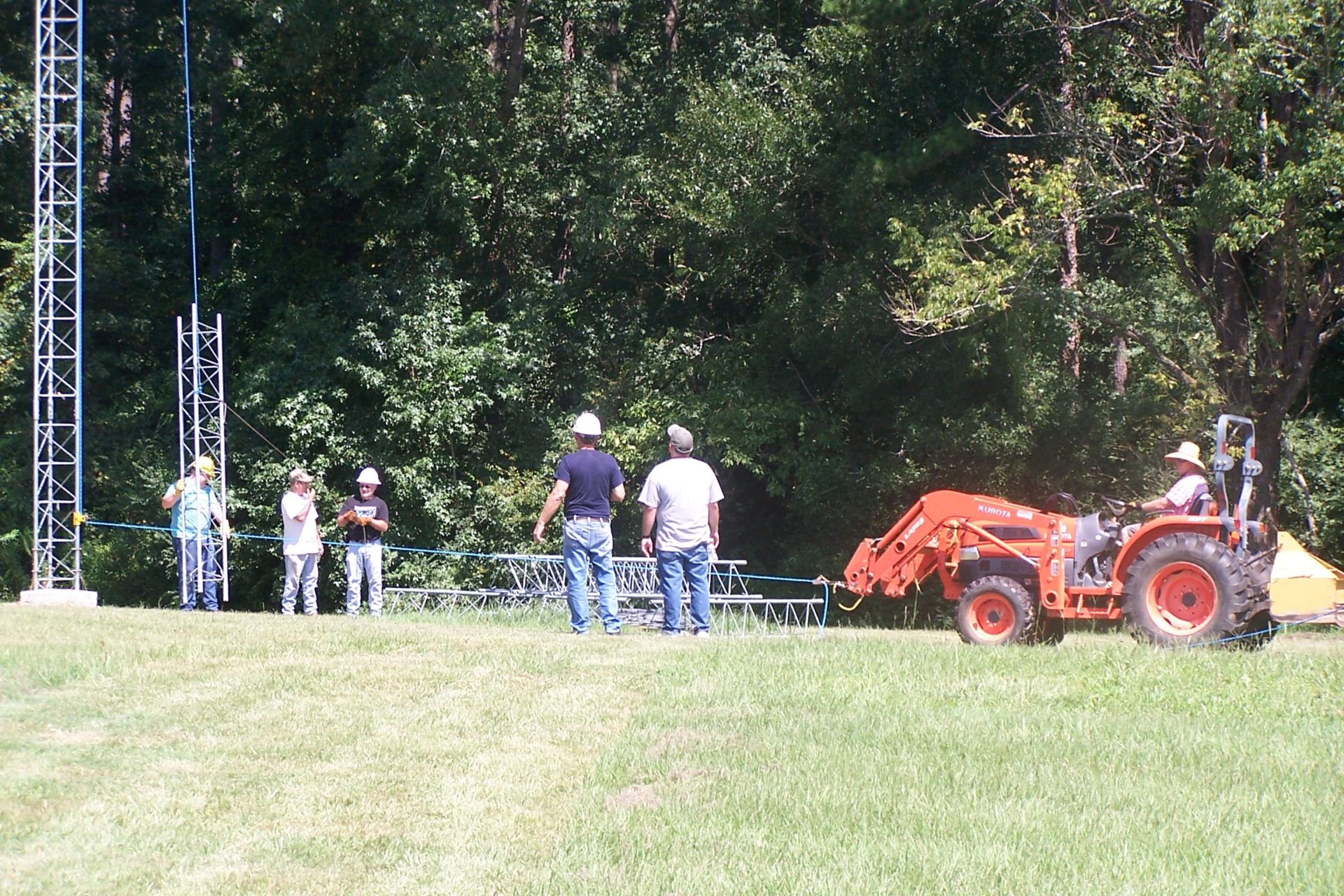 Began assembly of Phillystran guy wires.  Installed ground rods at tower base, connected to tower legs via #4 solid bare copper wire.  After more HFTA modeling, made final decision as to location of antenna on Tower #1.

After 18 months of offsite storage since acquiring them from W5IZ, I finally moved the pair of Force 12 C-51XR antenna to my shop, in preparation for assembly.

July 2009 — Still working to overcome the lightning strike.  I have done much this month:  installed single-point grounding plate, 6 Polyphasers, bonded those to the existing station ground.  I also began ‘standardizing’ my control cable connections with DB-9 type connectors.

Installed them along with PowerPoles on all my StackMatch control boxes.  These ‘quick connects’ will better enable me to disconnect for lightning protection and also be able to swap a controller to another cable quickly in case of failure.

Also fabricated and installed a cable tray to run the length of the shack.  It is about 12 inches above the floor.  It is made from a section of 4″ PVC pipe.  I cut  a 1.5″ slot down its length.

Also pieced together a working computer from several that were lying around.  It won’t win any speed records, but it is Win98 and will run most software that is needful in the shack.

Also ran a 1″ conduit from my house to the shack (250 feet).  Pulled 2 runs of CAT5E, and connected to my wired network in my house.  Now I have a network connection with DSL for internet access, and a VoIP phone extension in the shack.  What better way to call “room service” at meal time?  I’ve never had high-speed internet in the shack — it sure is nice!

Finally strung my 160 meter dipole up in the trees on the north side of my property.  It runs east-west, and is more or less an inverted vee.  The peak is at about 60 feet, and the ends are about 15 feet up.  I know it is not the optimum setup, but it is better than none!  Also spent some time tweaking some intermittent problems with my TopTen Band Decoders, Ice 419s, and Six Pack.  Finally resolved by making a modification to the source driver boards in the the Band Decoders.  The mod is to install 1N4148 diodes to prevent the Ice from switching the Six Pack relays.

Today I got the first tower base and guyposts set in the ground and concreted in.  The project used 8 cubic yards of ready-mix. Now, I’ll wait at least 3 weeks to stack the first tower, 120 feet of Rohn 55G. 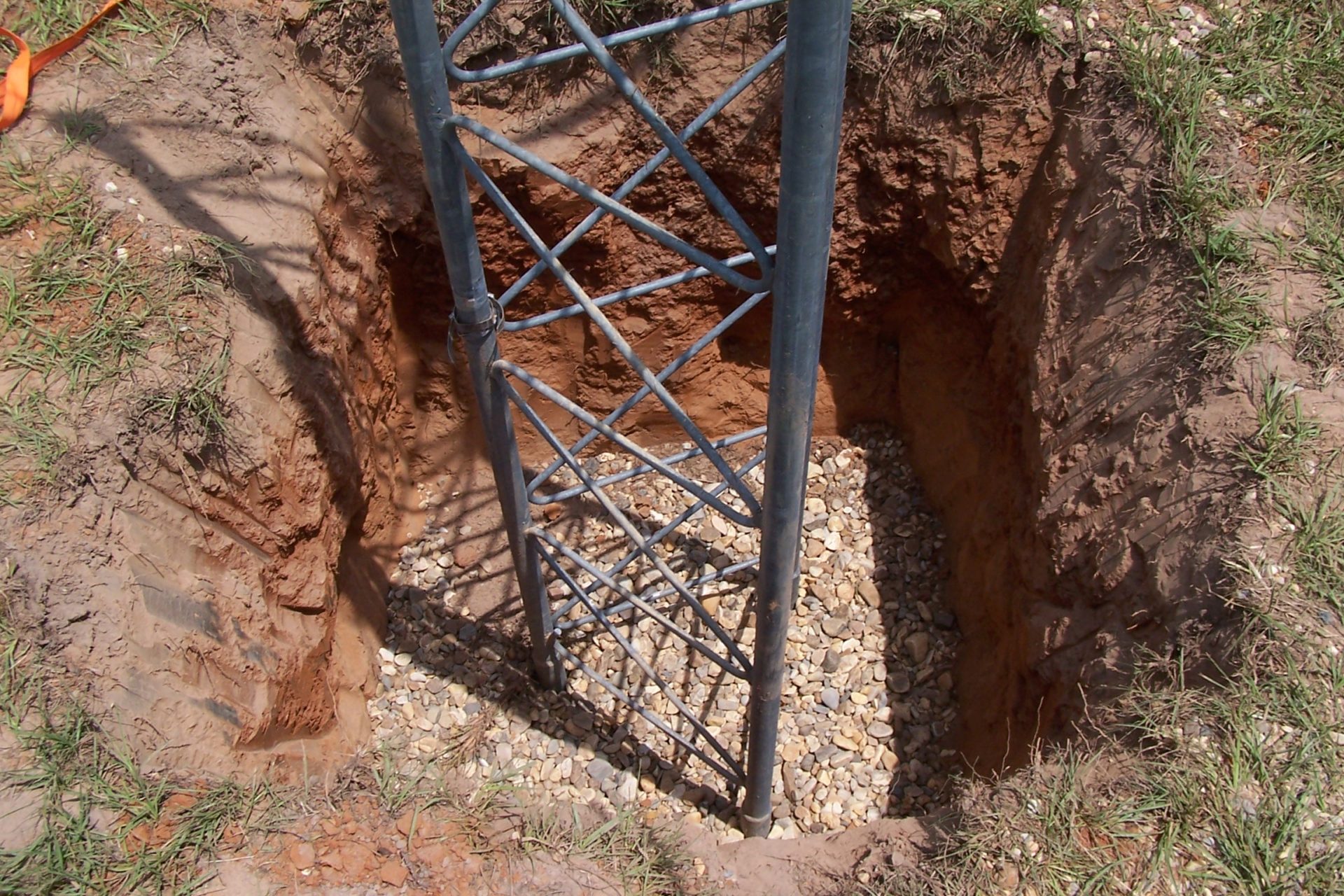 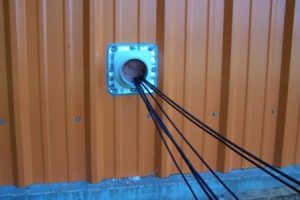 Installed 4″ PVC pipe through walls to route coax/control into shop and then into shack.